The hamlets of Santa Fiora

The village, as almost all other towns of the Amiata, only exists thanks to the high presence of water, which in this area comes out abundantly due to the meeting of the volcano-origined trachytic rock with the underlying sedimentary rock. he name of Bagnolo itself comes from a stream that comes down from the mountain of the Cadone. It is formed by eight traditional boroughs: Fosso, Chiesina, Convento, Giovo, Osteria, Poggetto, Faggia and Case Fioravanti.

Canti di questua della Befana (Begging songs for the Epiphany), on the evening of January 5th. Among the local products we remember the cake called ciaramito.

Amiata mushroom festival:one of the first and most original festivals of our mountain (dating from 1959), which takes place in October through a series of attractions, exhibitions and excursions.

Washhouses in celebration:Sunday in mid August, event taking place in several restored washhouses of the town. In the wash houses of Fontespilli, Le Piazze, Case Fioravanti and Convent, the women of the village recall the use and the ancient art of washing clothes in the waters of public washhouses with traditional clothing and tools. 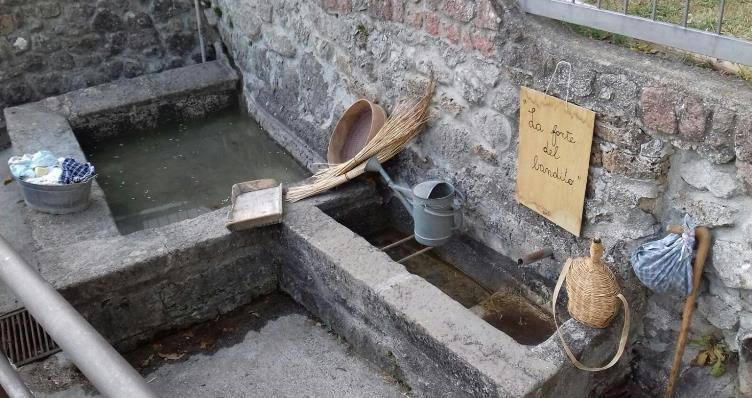 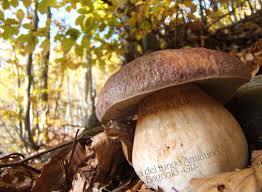 Small town that runs along both sides of the Provincial road that goes from Arcidosso to the Bivio delle Aiole and then to Santa Fiora. In the second half of the nineteenth century and up until the early twentieth century it was a famous health resort, frequented, between July and the end of September, by tourists from Maremma and Rome.

In the Bagnore area, a plant for processing cinnabar extracted from the Monte Labbro area was built in 1923 and operated until 1975.

The Cooperative “Il Risorgimento”, from which current Coop Unione Amiatina comes from,was founded in this same house in 1908.

Tabernacle Madonna del Castagno: according to the legend, the Holy Virgin protected a shepherd boy attacked by wolves, bending over him and his sheep some chestnut tree branches. 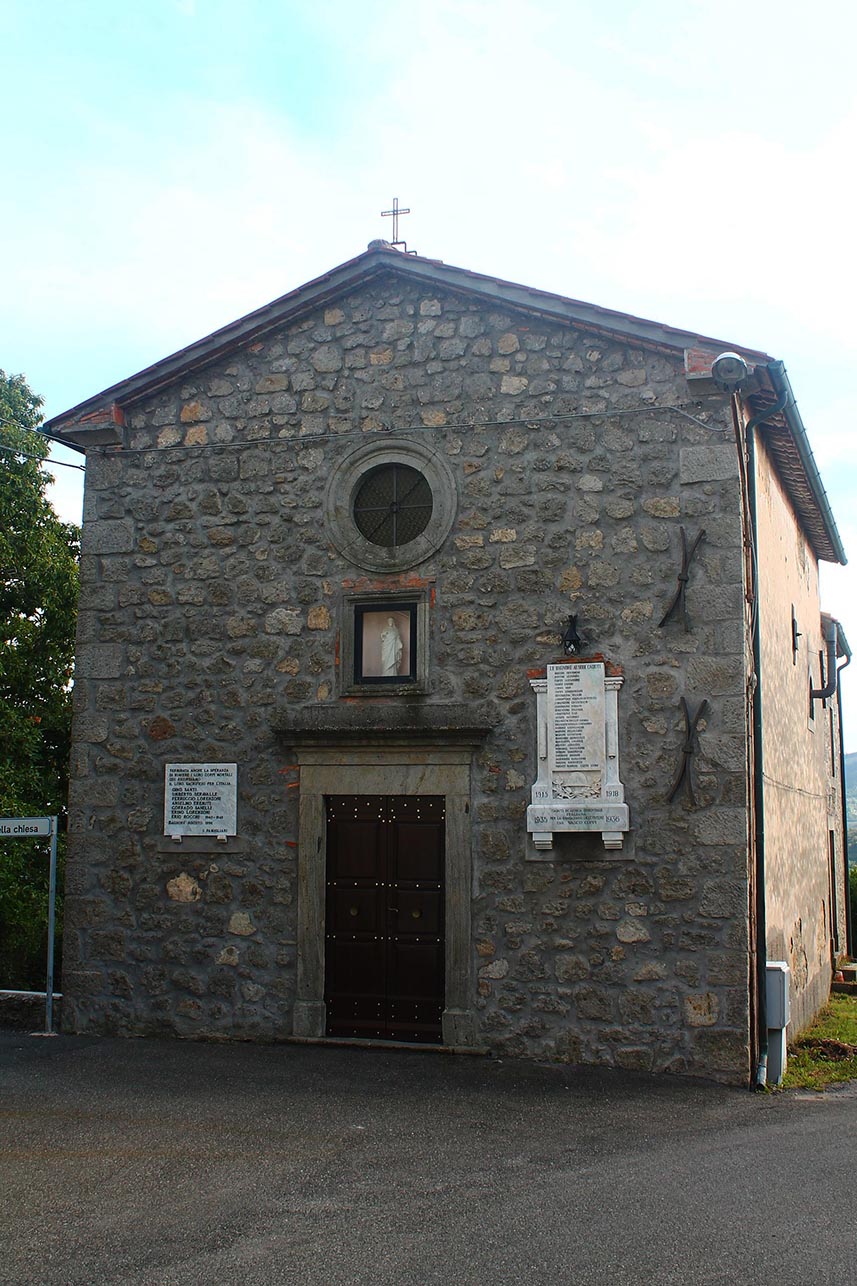 The thick and luxuriant chestnut groves give their name to the small town.

One of the main parts of its economy was also the seasonal emigration to Maremma, the hard work in its woods, far from home, among hunger, misery and malaria. In fact, two daredevil brigands were born at the Gretini and then ambushed there: Settimio Menichetti (1861-1897) and Settimio Albertini (1865-1897).

Canti di questua della Befana(Begging songs for the Epiphany): on the evening of January 5, from dusk until late night. 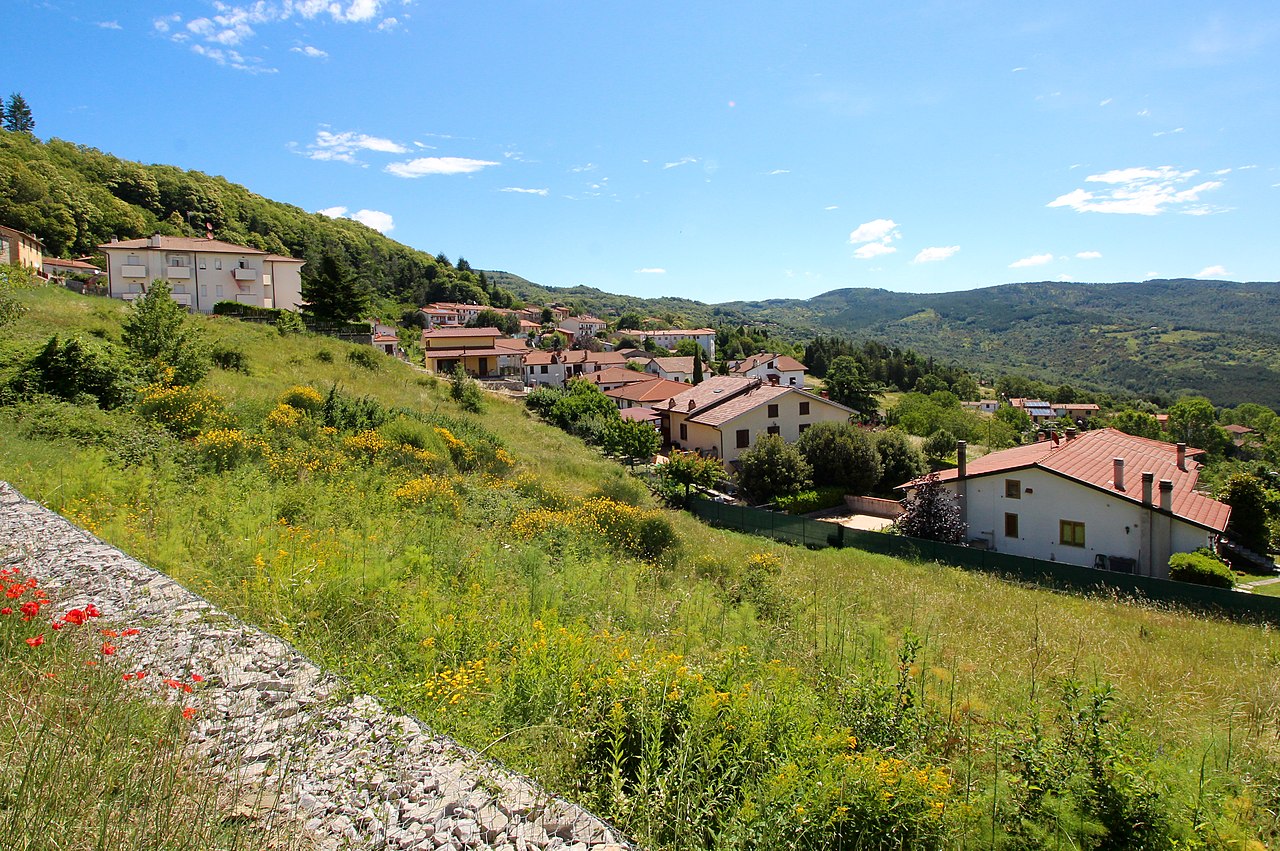 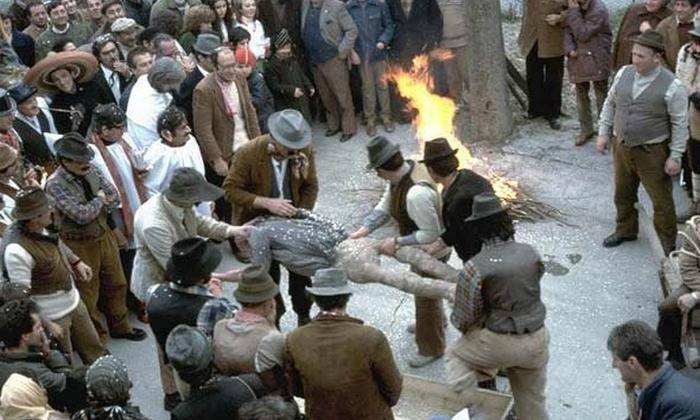 A bunch of houses scattered in the woods: a starting point for breathtaking signaled excursions routes. This is how the hamlet of Selva appears today, stretching out on the slopes of Mount Calvo (930 m asl) on the right side of upper Fiora valley. The place was first mentioned in 1077 just like Mount Calvo, where the Convent of the Most Holy Trinity was established according to the will of the Aldobrandeschi family, Counts of Santa Fiora.

The first Sunday of August: walk around the springs of Selva 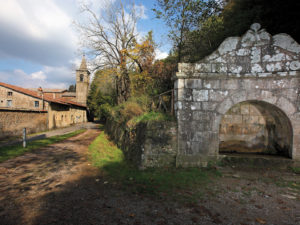 Convento della SS. Trinità alla Selva (Convent of the Most Holy Trinity in the Woods)

The stone bell tower allows you to see the church from afar, emerging among the tall white firs of the so-called Bosco dei Frati (Friars’ Wood).

The façade has a five-arched portico, typical of pilgrimage structures, surmounted by a large painted window. On the left you enter St Stephen’s chapel, while on the right there is the entrance to the convent. A plaque placed next to the door remembers the inhabitants of Selva who died in the Great War. Another epigraph, above a door leading to the monastery, recalls the Grand Duke of Tuscany Leopoldo II of Habsburg Lorraine, who visited the place in May 1846. The chestnut wood inner door, an appreciable artefact decorated with inlay, dates back to 1891.
Inside, the main altar is surmounted by a crucifix with a large seventeenth-century crown, supported by some columns. In the left aisle is the tomb of Count Guido Sforza, with an epitaph and a bust in bas-relief.

Among the paintings inside, in the left aisle we can also see the eighteenth-century altarpiece depicting Saint Paschal Baylón in adoration before the Eucharist and the painting by Girolamo di Benvenuto da Siena portraying the Assumption of the Virgin with the Saints Jerome, Thomas and Francis; in the background we can see the client Guido Sforza in prayer and the Maremma coast.
On the central altar of the right aisle, the Della Robbia terracotta altarpiece depicts the Holy Trinity. It comes from the Sforza church. The wooden confessionals, recently restored, are also worth a mention.
Behind the main altar there is an interesting wooden choir, which can be accessed from the room at the end of the right aisle.
In this room, in front of the sacristy, there is a case set into a wall that contains the upper part of the skull of the “snake” which a well-known legend tells about: at the end of the fifteenth century, an alleged dragon lived in the area. It was also called “orrido serpente” (horrible snake ) or “Cifero serpente” (maybe originally meaning “luciferine snake”). Probably it was a crocodile escaped from the fishpond of Santa Fiora. It used to spread the panic among the population and was killed by Count Guido II of Santa Fiora in the area still called “Fosso Serpentaio” (Snakes’ ditch), not far from the convent. 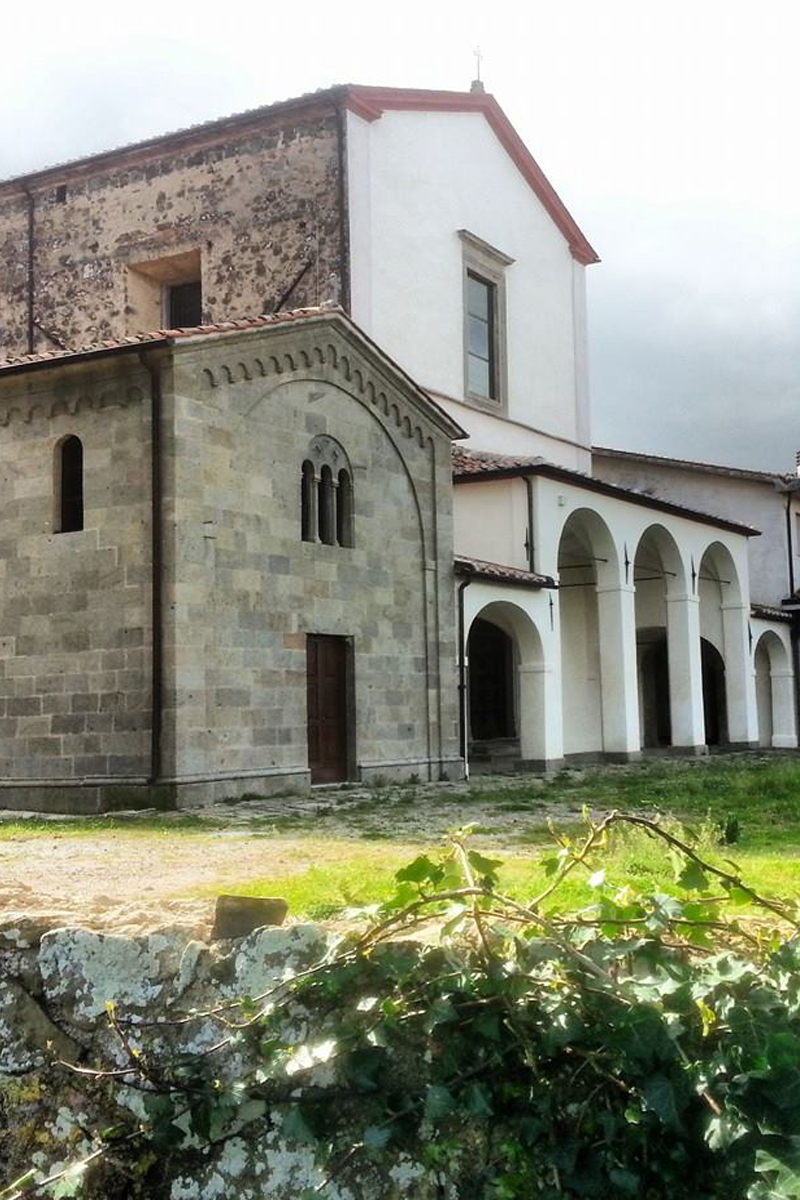 To learn more, available at the tourist office: 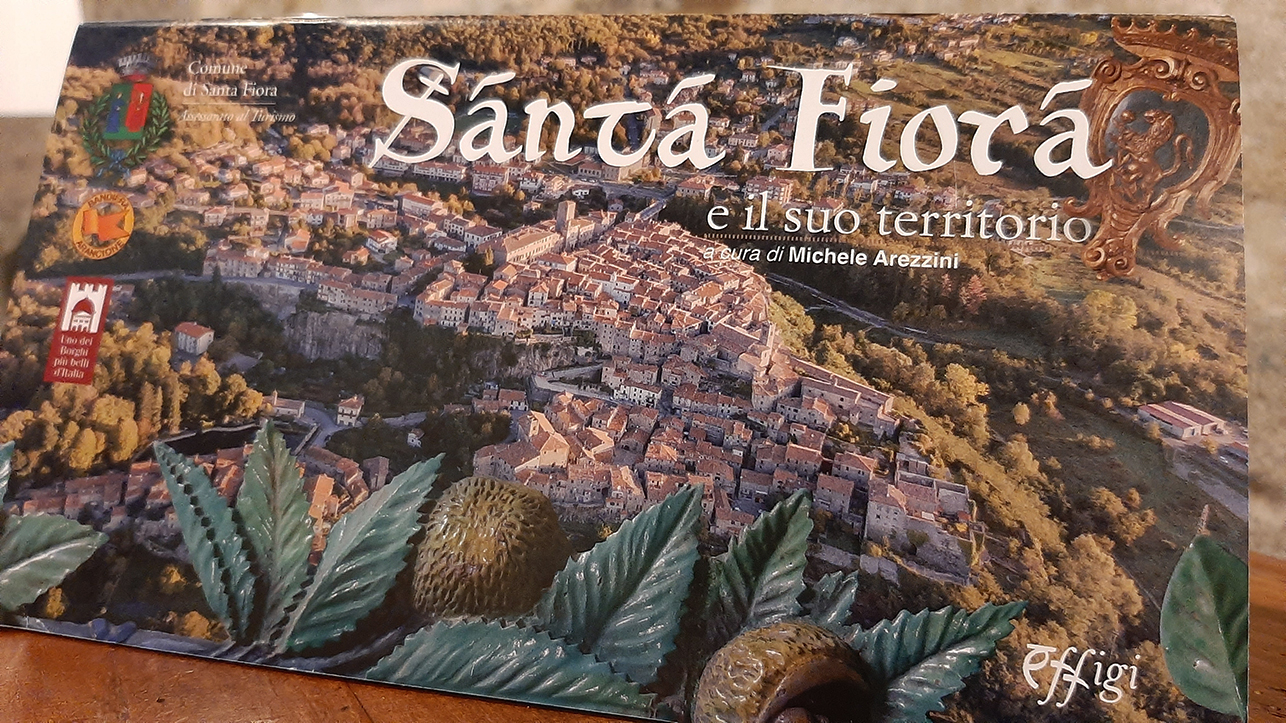 Santa Fiora and surroundings, with a map of the historic center
Free copy 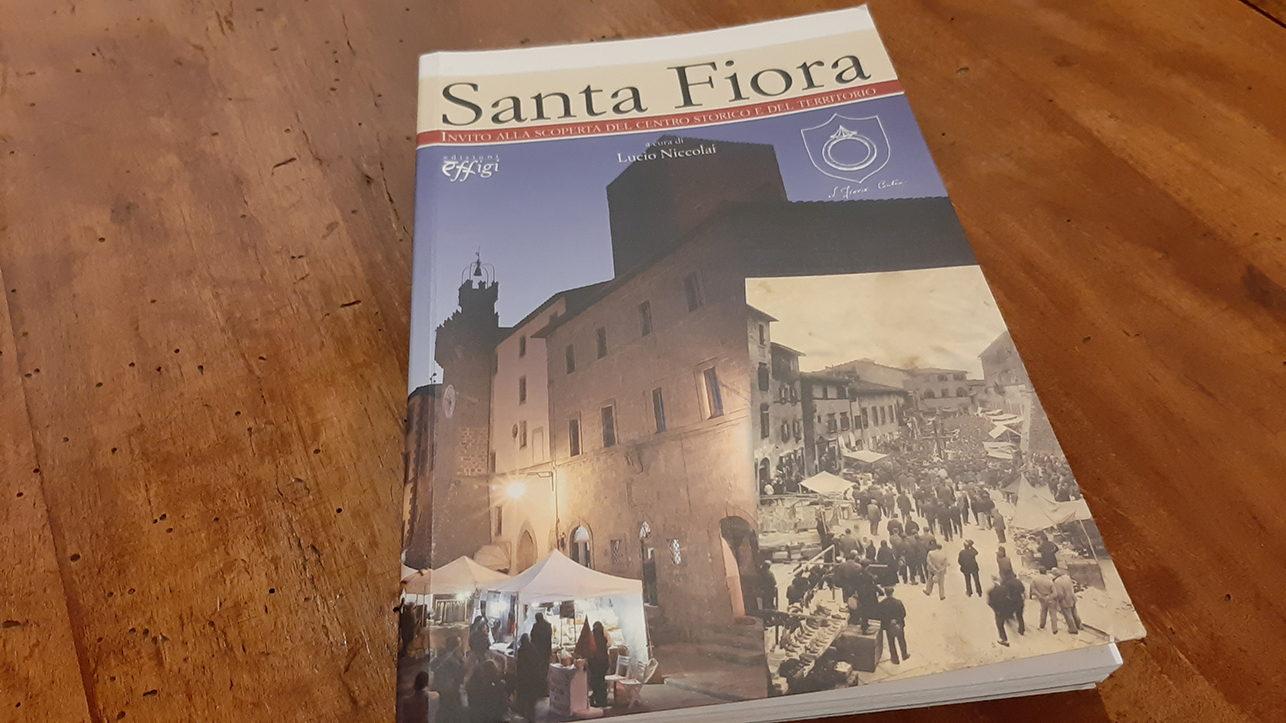 Santa Fiora, an invitation to discover the historic center and the surroundings, by Lucio Niccolai
Price: € 9,00 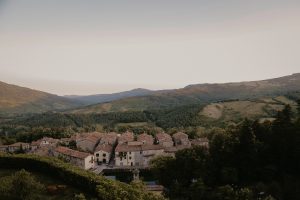